Built a baby cam for our newborn! Features: Night vision, temperature, humidity, keeps track of record low/high temps. Made with a Pi Zero W from @Raspberry_Pi, brown rice, part of a broken chopping board and a pasta sauce jar pic.twitter.com/ZfBmDrcVQN

I recently Tweeted about the Raspberry Pi baby monitor that I built and got heaps of comments, thanks! Here's a build guide, as promised. Apparently, the build looks like Johnny 5 from the 1986 film Short Circuit. I was born after that film and haven't seen it but yeh, it kinda does. 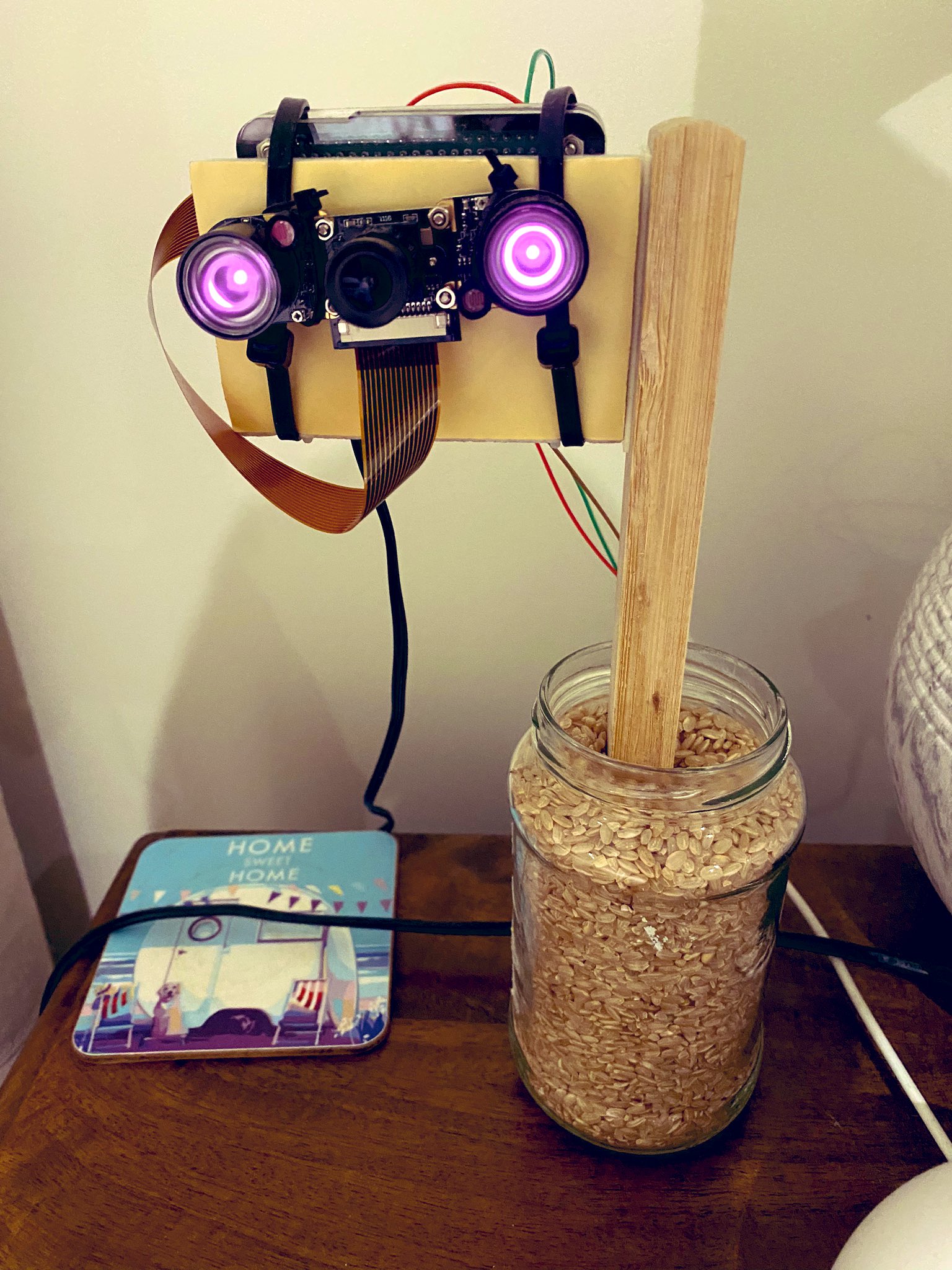 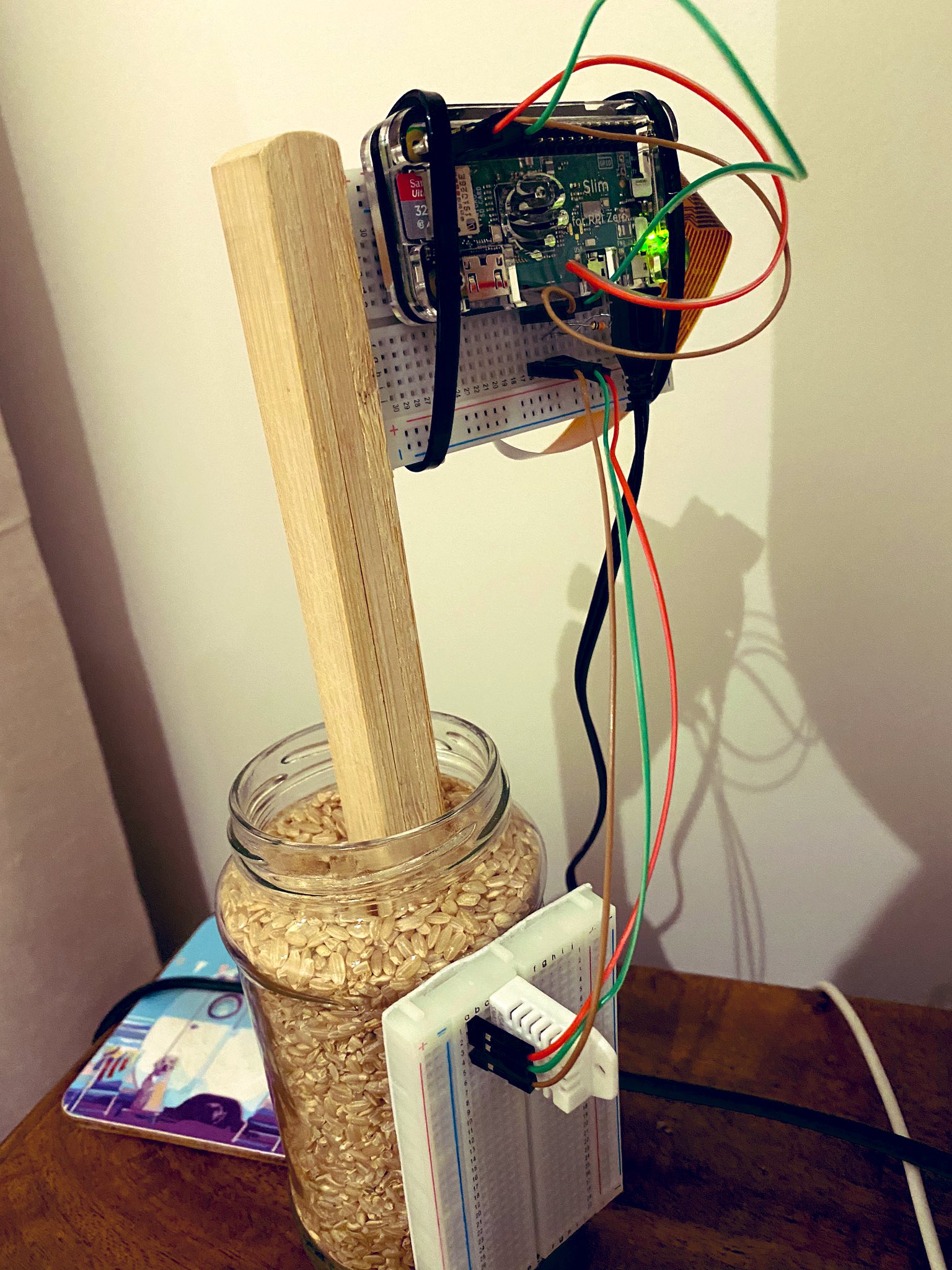 My specific build also used the following, but you can probably do better:

For the DHT22, I followed an article from PiMyLifeUp.com. Diagram: You'll notice that they've got an extra red jumper on their version - I think they just wanted to space things out a bit. I didn't bother with the extra cable but my resistor is kinda squeezed in. Their article covers the whole DHT22 set up, I'm not going to write out the same thing here.

Once you have wired everything up, let's test that it's working.

Make sure you have Python 3 and pip installed and then install the library to interface with the DHT22:

Run this command to test that we're getting readings from the DHT22:

which is the humidity and temperature respectively. You can read the full Python docs here. If you get (None, None) then re-seat the jumpers and DHT22. Also, I'm using GPIO pin 4 - make sure you change the 4 to whichever GPIO pin that you're using.

This was a feature request from the wife. Also, in a future project, I would like to start tracking temperatures/humidities in all our rooms and outside, throughout the year. I have a Cron job that measures the temperature via the DHT22 every 1 minute and stores the readings in an sqlite3 database, so we can calculate record highs and lows. You'll need a few extra packages if you want this feature:

and here's the minutely.py code:

Change the timezone from Sydney to UTC, or whatever you prefer. Note that this is "best effort"; we use read_retry to try getting the sensor data but if it keeps failing, we don't insert anything into the database. I've been running this code for a few weeks now and once, I noticed that the DHT22 stopped working; re-seating the DHT22 seemed to fix the problem (maybe if it was on a soldered board, it would be ok). Rebooting the Pi doesn't help.

Raspberry Pi cover camera setup in their documentation. It's just:

and then you need to go to Interfacing Options, select Camera and follow the prompt to enable the camera. You'll have to reboot. The documentation shows you how to take some test photos/videos to make sure it's working.

Putting it all together 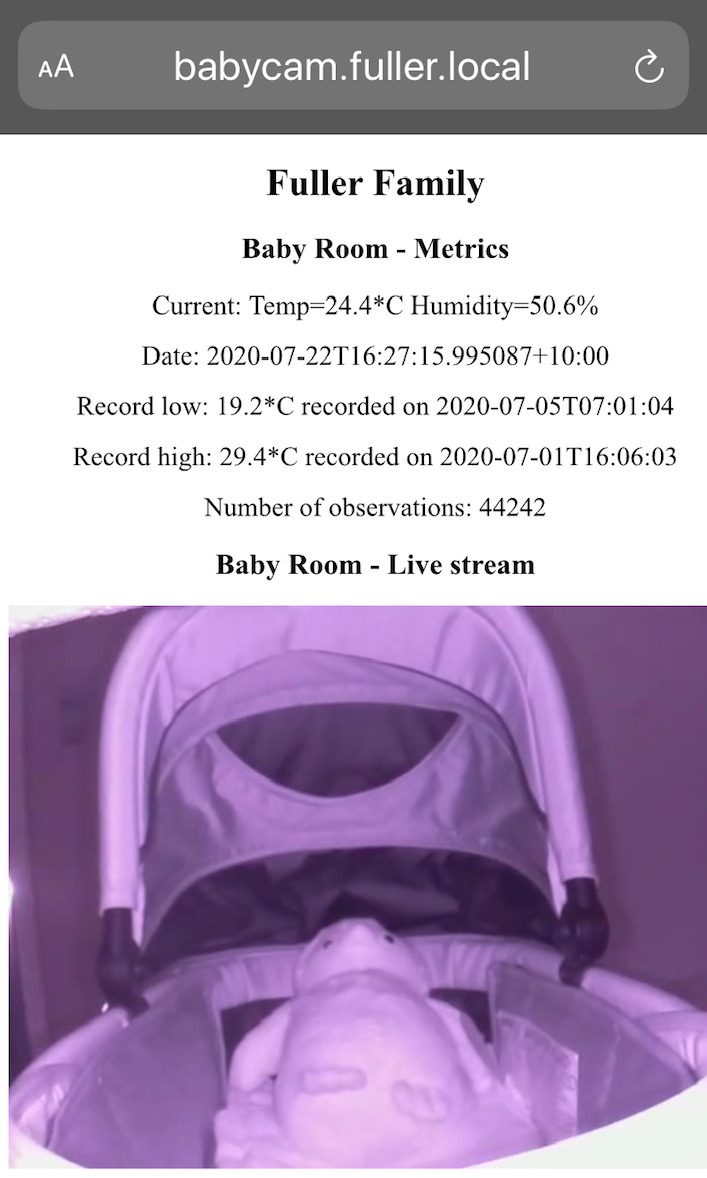 So now we need to put it all together so we can use all this data, and display it in a web browser. Here's the code to do this, which is a fork of existing code by Dave Jones. Follow the instructions in the README.md file but it's just:

To keep this running, I run this in tmux:

Notice from the server.py that I'm running the Python server on port 8080, this is because I run NGINX on port 80 and get it to forward the requests to Python. I don't cover NGINX here but, just install it, start it, enable it at boot and use something like this:

You'll notice that I'm able to access the stream with http://babycam.fuller.local. This is configured via a DNS server on my home network which is actually a Pi Hole too. I might do another blog post on this but they've made the setup so trivial now.

There are plenty of ways this build can be improved:

Thanks! Reach out if you have any questions or comments!